Kings Hill School has won a number of awards and we are very proud of our children.

In June 2016 we won the Tonbridge and Malling Kwik Cricket competition which was held at Kings Hill Sports Park. It was one of the biggest cricket events in Kent and featured 19 teams. 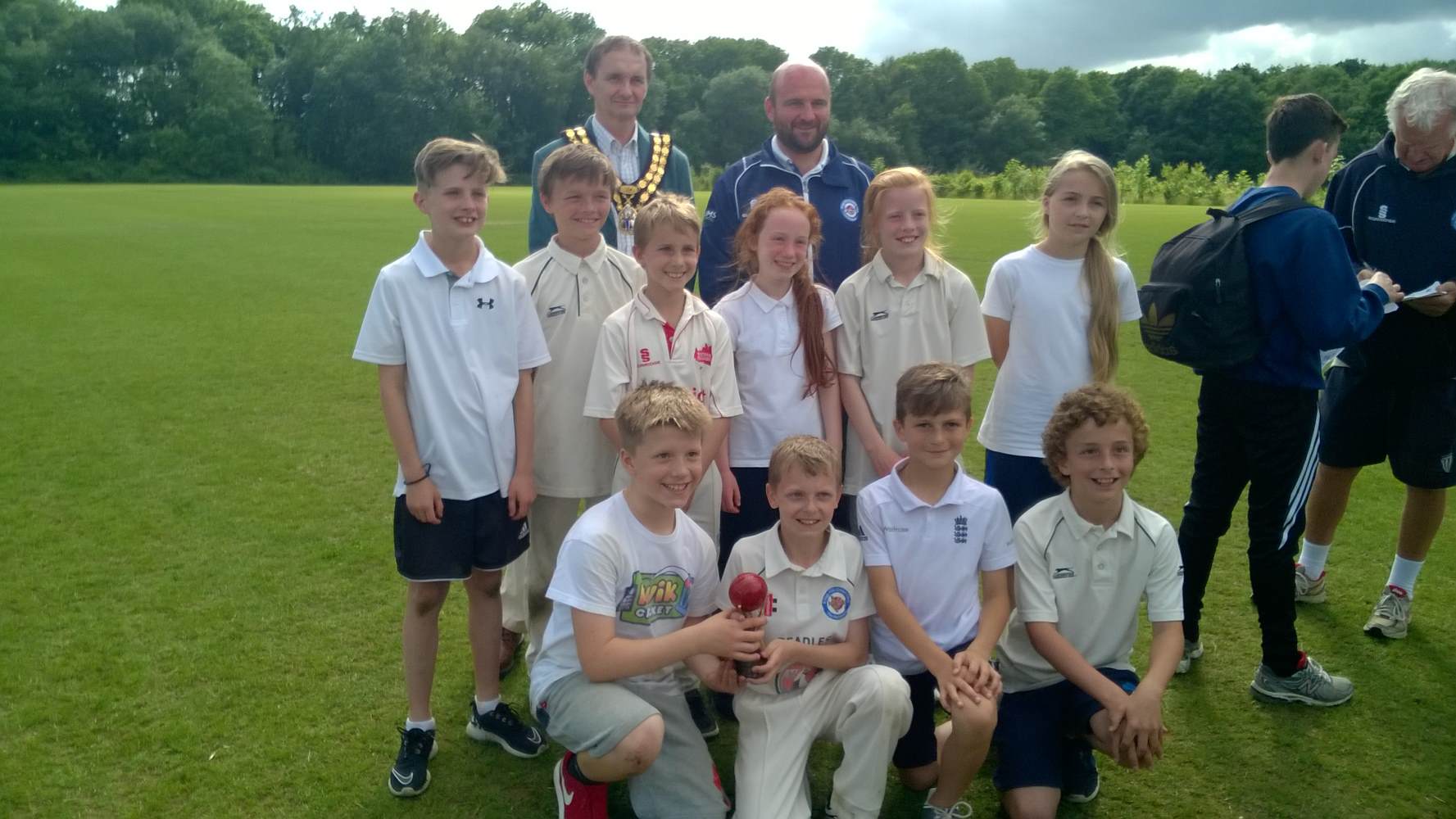 Our netball team have also won numerous games this year. They also went to the finals of the Kent Schools Games in Canterbury. 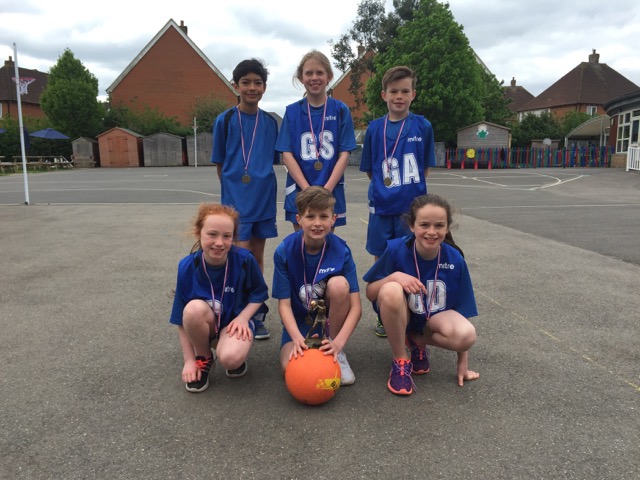 We are very pleased to have been awarded two literacy awards this year, one for the most engaging book theme week and one for the best promotion of reading for pleasure ! 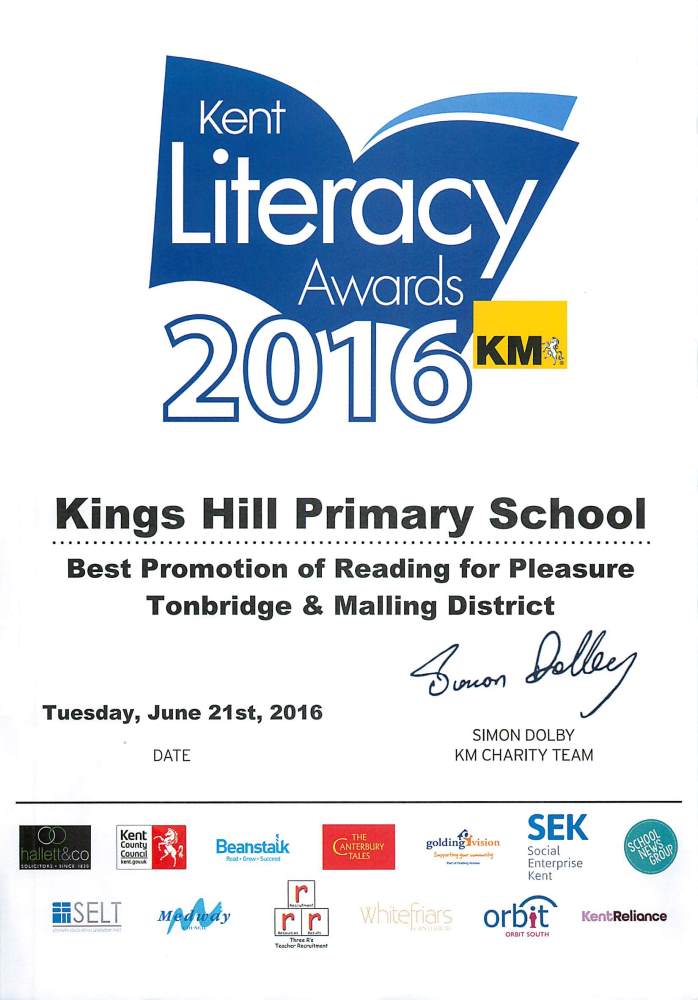 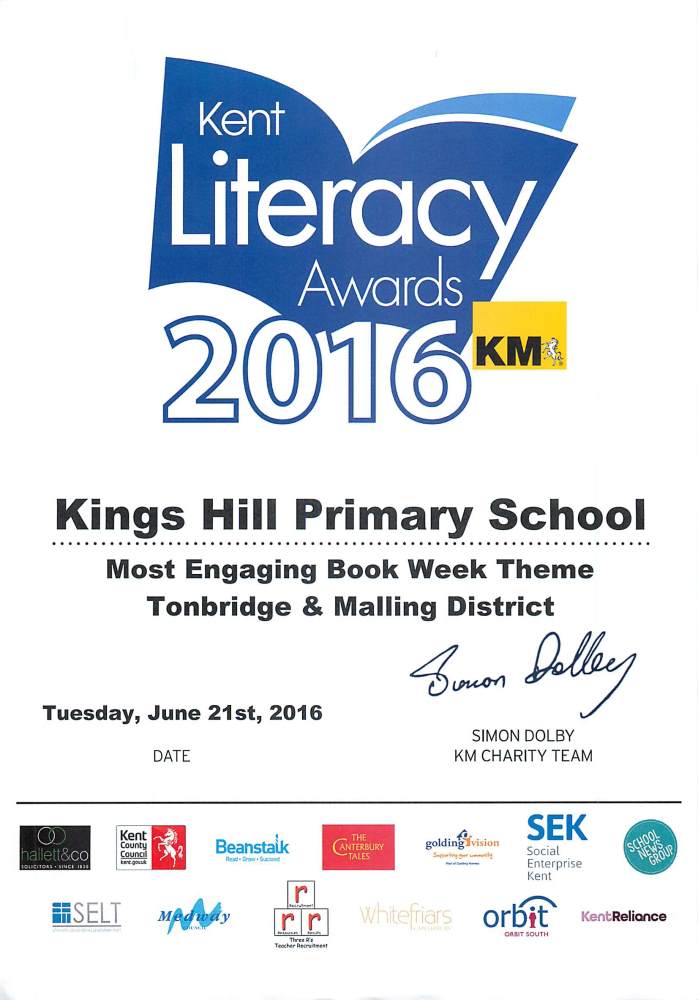 We are delighted that our Eco Club haven been awarded a highly commended certificate by the Green School Awards 2017  ! 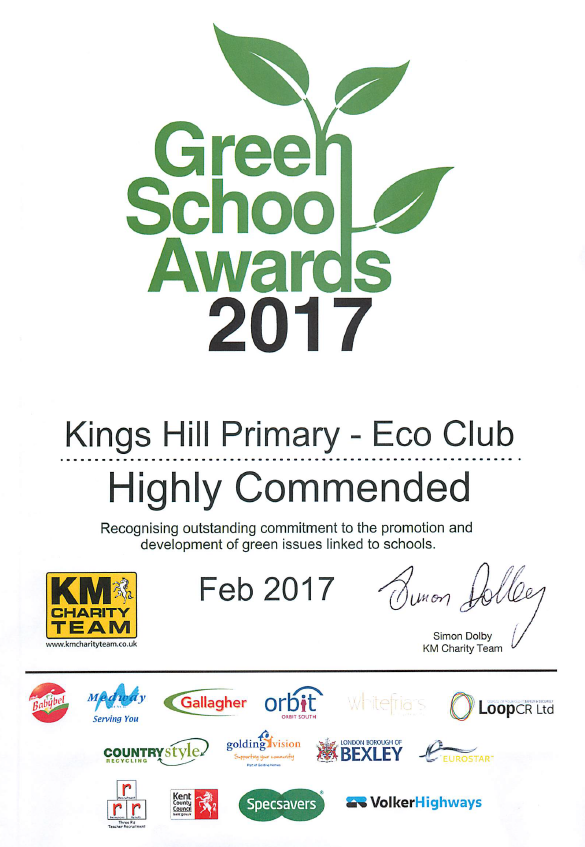 Kings Hill School has been awarded the Values Based Education Quality Mark in April 2017 for its effectiveness in this area and is the first school in Kent to achieve this accreditation.

Values based education is a recognised approach to teaching that works with values. It creates a strong learning environment that enhances academic attainment and develops pupils social and relationship skills that last throughout their lives. It underpins the school’s approach to British values; democracy, rule of law, respect and tolerance of other faiths and cultures and individual liberty.

In May 2017 Kings Hill School was assessed over two days for the Inclusion Quality Mark and we are pleased to announce that we achieved this mark and were praised by the Assessors in a number of areas.

Inclusion is embedded into the ethos of Kings Hill School. The excellent relationships between staff ensure that children feel well cared for and supported in their learning.

The School uses its Pupil Premium to good effect and there is clear data to monitor the outcomes of interventions such as additional support in the classroom and, Pets as Therapy and Breakfast Club attendance.

The Headteacher, Head of Inclusion and Senior Leadership Team are committed to the implementation of inclusive practices to ensure a caring environment for their pupils where high expectations have a huge impact on attainment, progress and wellbeing.

We are delighted that we have recently won a National SEN award in June 2017 for the ‘most innovative intervention’ which was our reading dogs intervention.

We have been running Reading Dogs since 2012 and it is our highest impact intervention to date. Children often ask to read to Duke who sits quietly and listens intently. Not only does this improve children’s reading skills, most importantly gives them a joy of reading and a motivation to read more.

Duke is always an enthusiastic member of staff who comes in excitedly every week and looks forward to his time with the children (and of course the occasional sleep). The judges will be coming to our school to present the award. 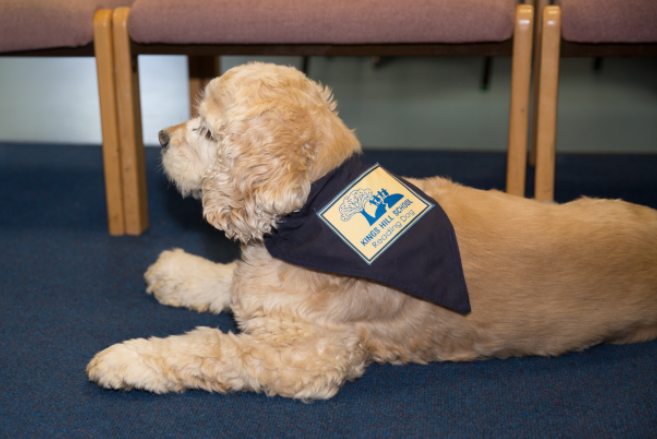 We are delighted to announce that we have been awarded the GOLD level National SMSC Quality Mark from the Citizenship Foundation in June 2017.

SMSC stands for spiritual, moral, social and cultural development. All schools in England must show how well their pupils develop in SMSC. We were invited to take part as a pilot school as the award will be rolling out from September 2017. We are excited that the Citizenship Foundation would like to share the provision we give our children with other schools.

In the 2017 KM Literacy Awards we were delighted to be awarded 'Best School Library' in Maidstone and Malling. 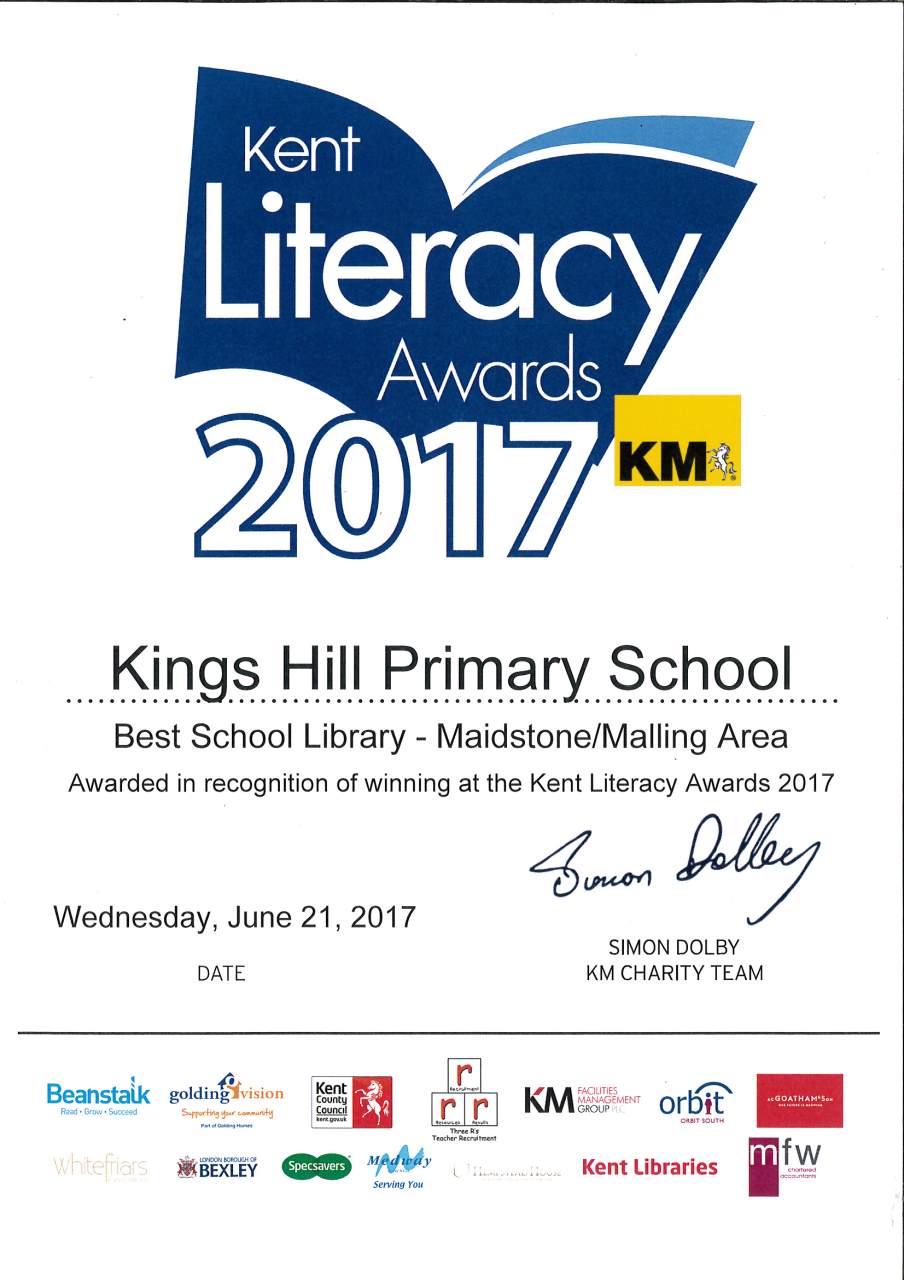 We are pleased to announce that Kings Hill School received the STEM ambassador award for our commitment to increasing our children’s awareness of science activities through our extracurricular science clubs.

We have been running infant and junior science clubs for two years now and they are a great success. 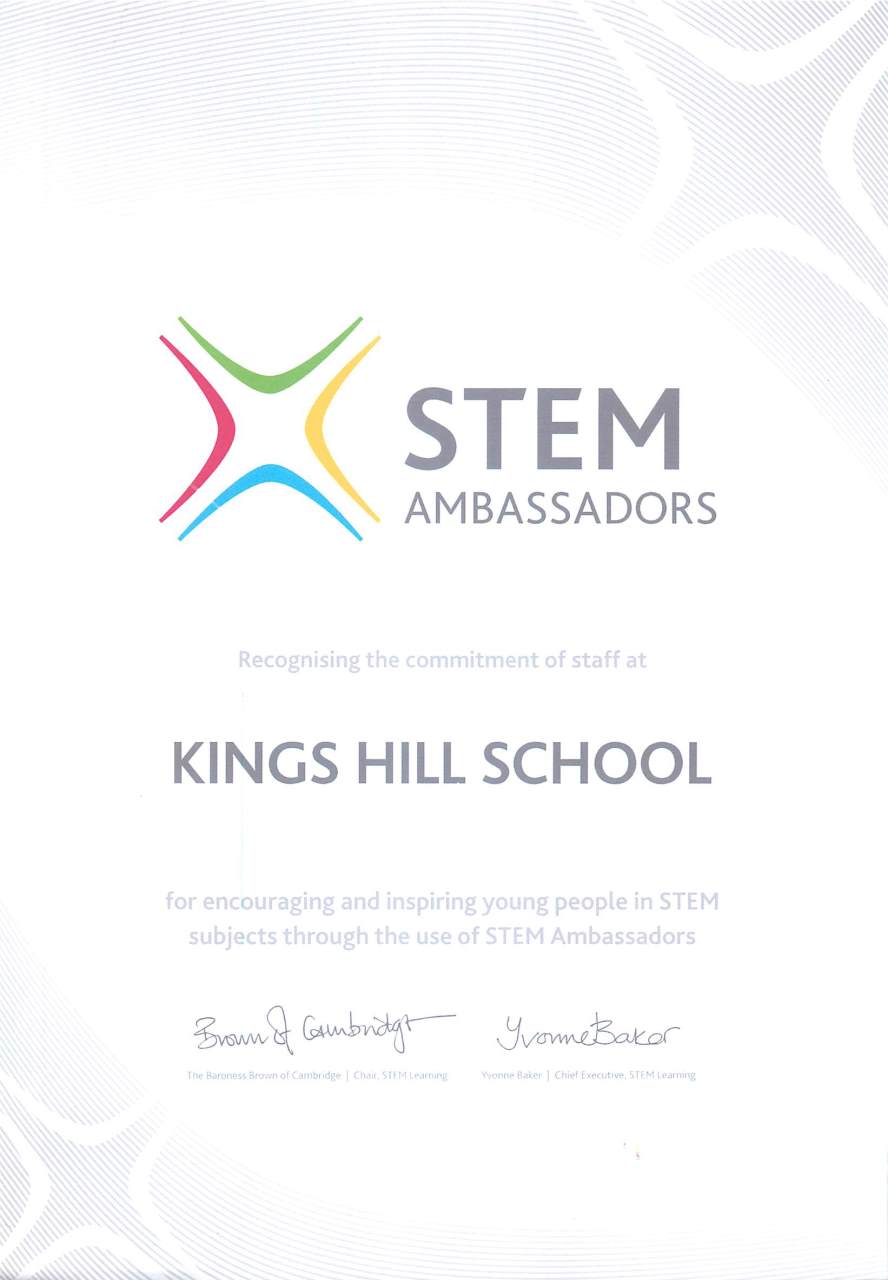 In 2018 we won the Kent Literacy Award in Tonbridge and Malling for the best use of drama to promote speaking and listening skills. This award was based on our performance of Joseph by Year 4. 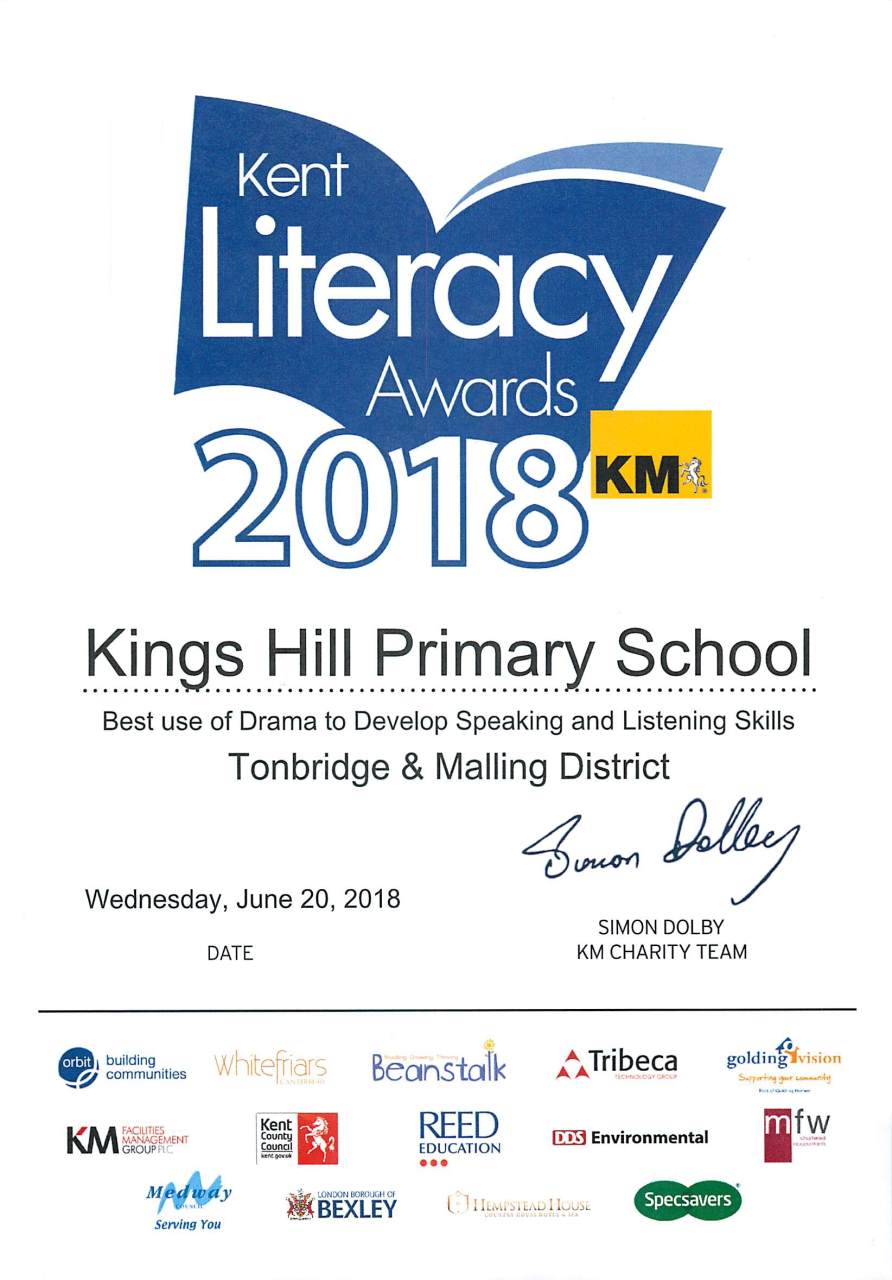 2) Overall 'Best Health and Wellbeing Award' in the whole of Kent !!

The awards represent the hard work by the children and staff on the Children's Health Project that we started in September 2018. 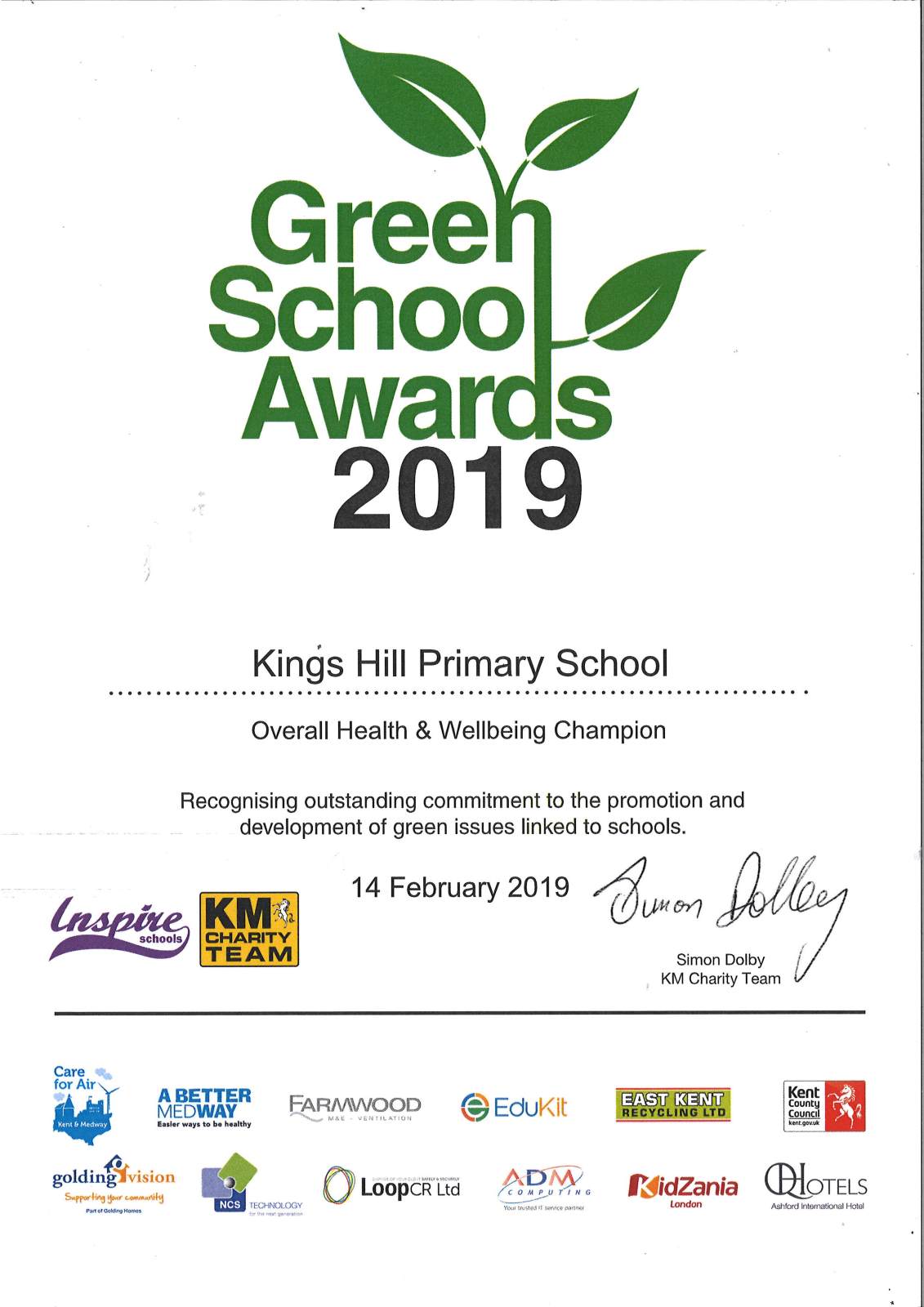 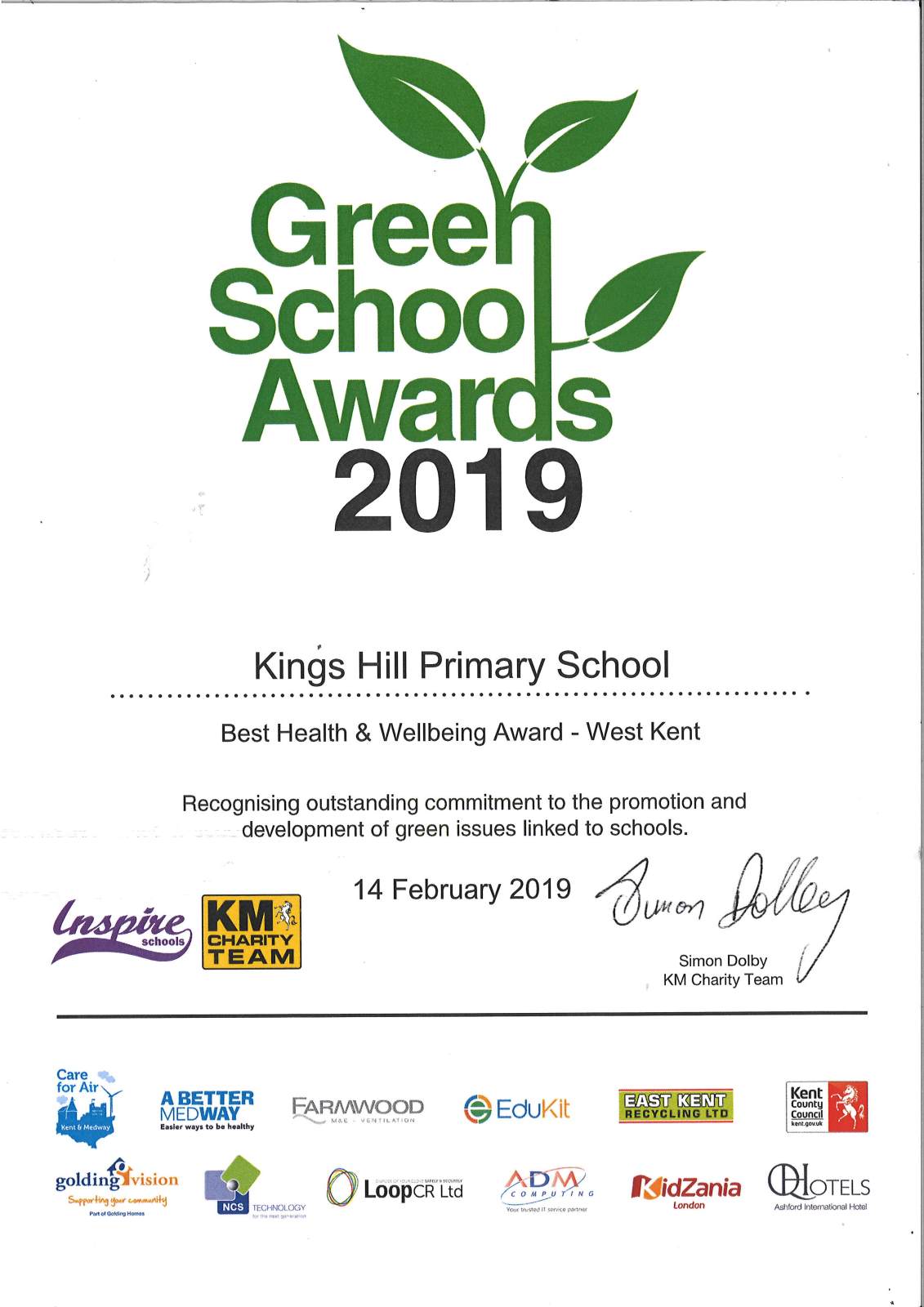 We are very excited to tell you all that we have been awarded an Outstanding Primary Languages Development Award for the way we deliver modern languages at Kings Hill School. The assessment took a year to collate and we were assessed on evidence for the following categories: School Improvement Planning, Subject Coordination, Training and CPD, Teaching and Learning of MFL, Tracking and Assessment, Links Abroad and Transition to Key Stage 3 and were judged Outstanding in all areas.  The assessor said, “I can see how well languages run in your school, the organisation of the subject, the links you have with other subjects, the brilliant links to other schools, your celebrations in school and I could go on...”  This really shows that as a school community, our intention is to deliver and implement a high-class language-learning curriculum. 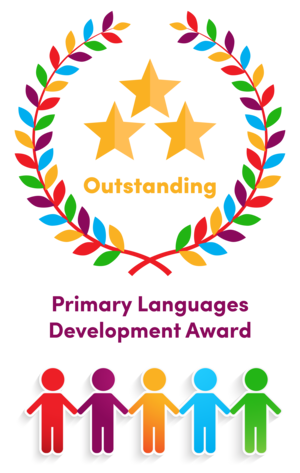 In October 2020, Kings Hill School was awarded the Centre of Excellence Inclusion award.

We completed a re-assessment for the Inclusion Quality Mark, which we were delighted to first be awarded three years ago in 2017. Our staff, pupils, parents and governors all took part in the two day assessment to celebrate the inclusive ethos of our school. Ofsted defines an educationally inclusive school as one in which the teaching and learning; achievements, attitudes and well-being of every young person matter, which puts it at the forefront of everything we do and is echoed through our values and motto.

Our assessor commented that provision for our vulnerable pupils was ‘exemplary’ and that ‘all pupils are valued no matter what their ability or disability. She said ‘Inclusion permeates every aspect of the school and reaches every corner and every aspect of their work.’

As a result of the whole school assessment, we have not only been given the Inclusion Quality Mark, but we have been recognised as a ‘Centre of Excellence’, an award only given in exceptional circumstances. Only 200 schools across the country have been given the ‘Centre of Excellence’ title and we are proud and honoured to be recognised in such a way. 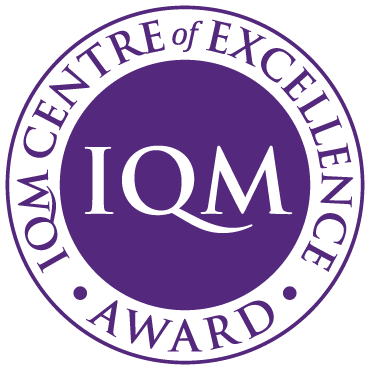 In May 2021 we were delighted to achieve the 'Primary Science Quality Mark'. At Kings Hill School our Science leaders have worked hard to ensure that there is a high quality science curriculum and that children develop the knowledge and skills that they need to succeed in science.

Helen Ward, Director of the STEMHUB for Canterbury Christ Church University said, "Congratulations to your hard working team who were outstanding." 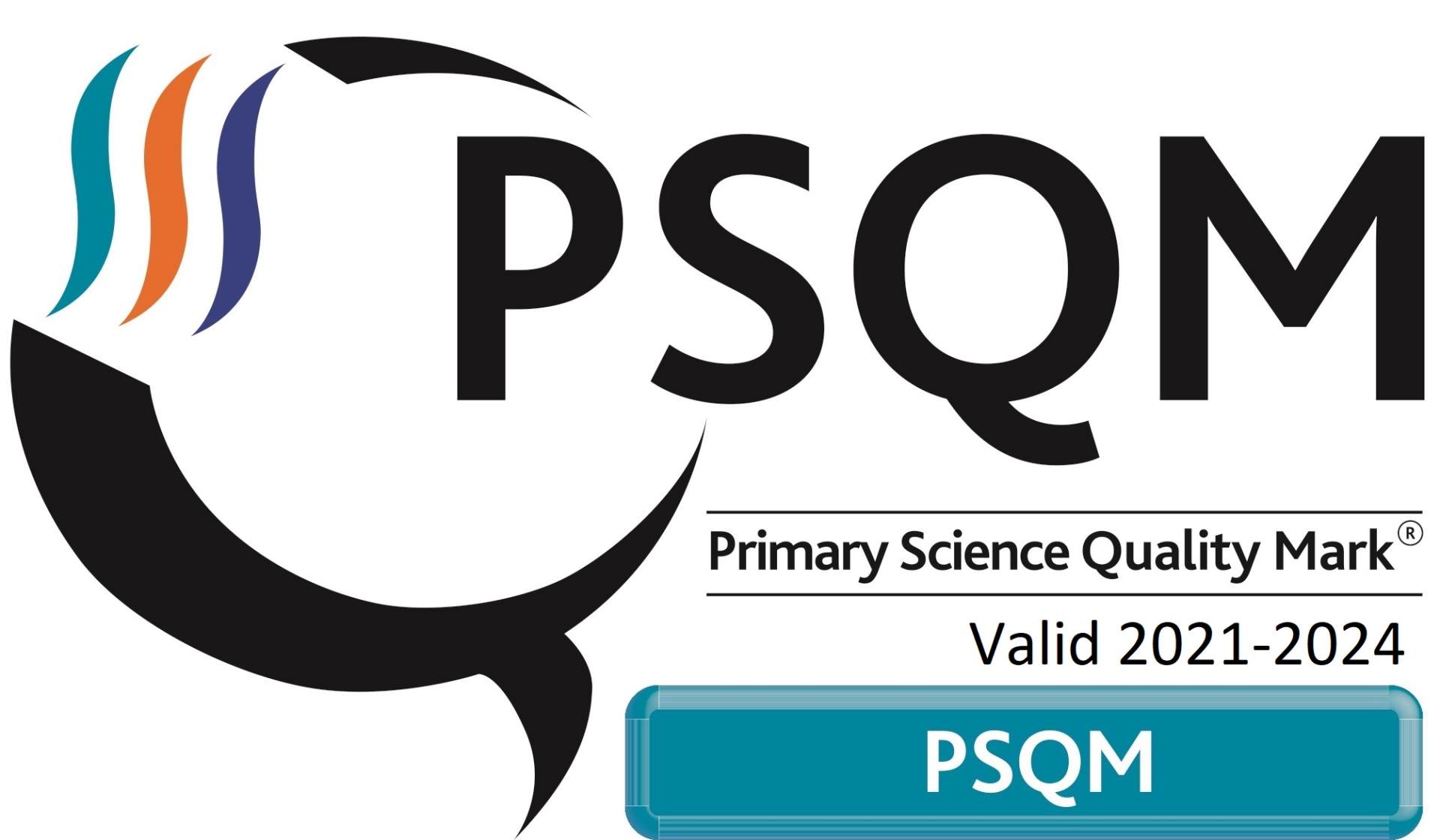 In September 2021 we achieved the Centre of Excellence for Inclusion for the second time and the third time we have received an Inclusion quality mark !

Here are some comments from the report :-

"I shared with the Head teacher and the IQM Lead that it was impressive that during the Covid climate they were continuing to lead the school in such a positive way and had put in place measures to ensure that there was accessible support and that the learning of the pupils remained a high priority. The collegiate approaches used by Senior Management in planning and reviewing, demonstrate value and respect for their colleagues. It was a privilege to meet with staff so fully engaged with inclusion and with such positivity. Inclusion is articulated and evident and is central to school ethos. The school have gone to extraordinary lengths to provide excellent support throughout the last year to each and every pupil. They have done an amazing job. The school is fully committed to including all pupils and staff."

We received GOLD status again for our SMSC provision within our school. We were first assessed for this in 2017 and we were also awarded Gold at that time as one of 11 pilot schools nationally.

However, not only have we been awarded gold for the second time but Young Citizens have invited us to be a Beacon school for SMSC nationally. There are very few SMSC Beacon schools in the United Kingdom. This means that we will share our practice with other schools.

If you are not familiar with the term SMSC, SMSC stands for ‘spiritual, moral, social and cultural’ and is a key aspect of developing a child’s character and attitudes. SMSC is an integral part of a child’s personal development and plays a significant part in the ability for a child to learn, achieve, experience personal growth and become an individual with integrity and appreciation for others and the world.

At Kings Hill School SMSC is fully woven into all curriculum areas and we aim for children to:-

There is more information about how we develop SMSC at Kings Hill School under the section on our website called ‘Personal Development’.

I have also attached the report from the Assessor incase you are interested in reading it.

I would like to thank children, parents, governors and staff for making Kings Hill Primary and Nursery such a strong community with a well embedded values ethos and commitment to the highest standards of SMSC provision enabling our children to become such respectful and articulate young people. 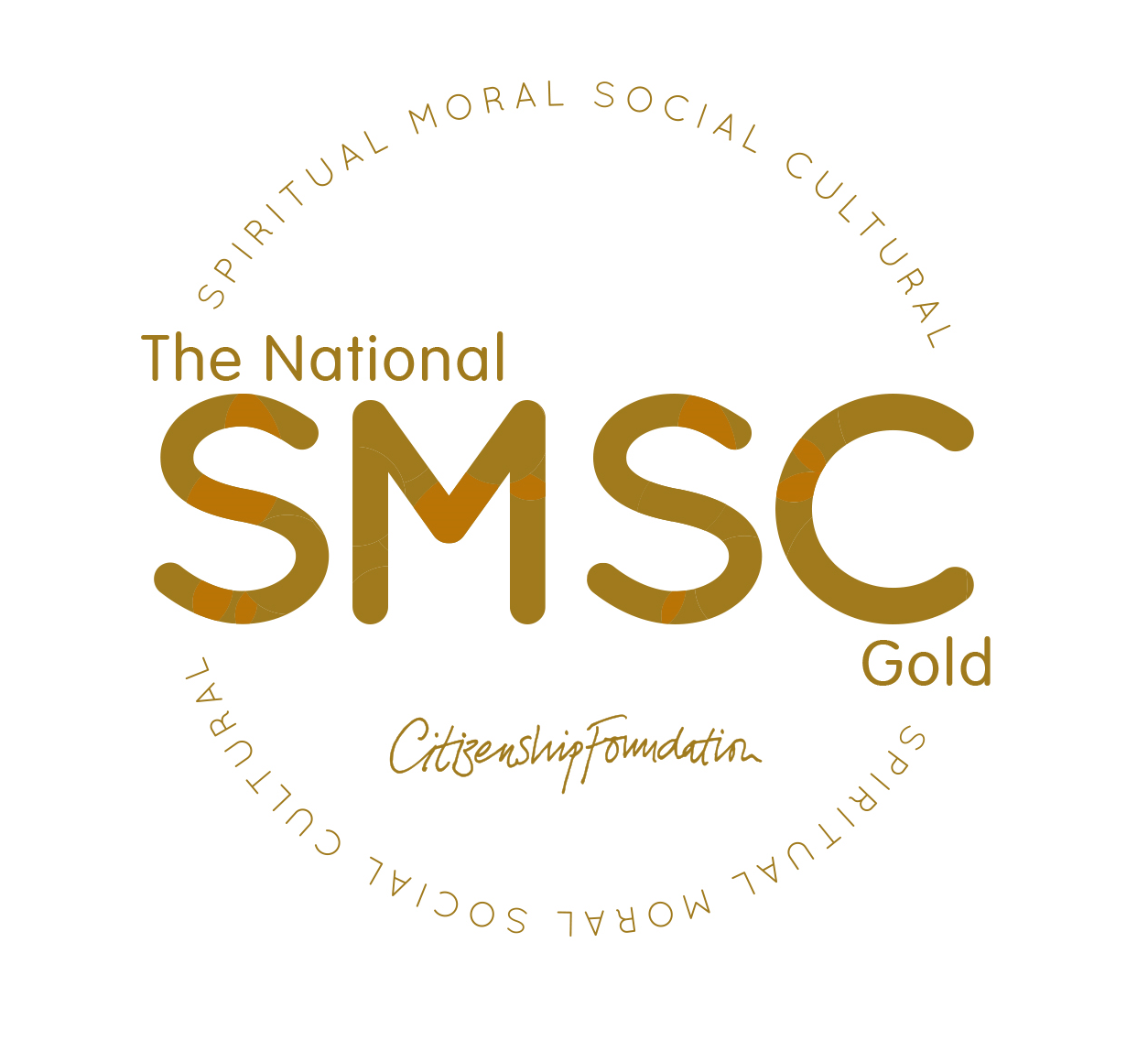