Children had a most curious Book/Writing Week at school as strange incidents were discovered and mysteries were unravelled – Crime Week had hit Kings Hill School with a bang!

Children from Years 1-6 all took part in a forensic science workshop where they had to uncover the mystery of the stolen money from the safe! The suspects mugshots were all lined up and using forensic science and detective skills examined fingerprints, footprints, DNA and hand written notes so that the children could work together to establish who the culprit was. 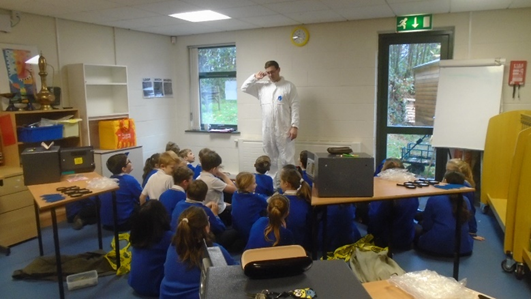 News soon spread and it wasn’t long before all year groups were engrossed solving their mysteries.

Lion and Tiger Cubs read the book “What the Ladybird Heard!” and thought carefully about the characters in the book before working on some eye-catching wanted posters. 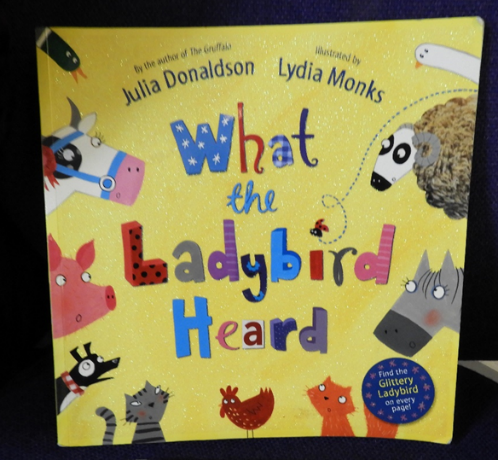 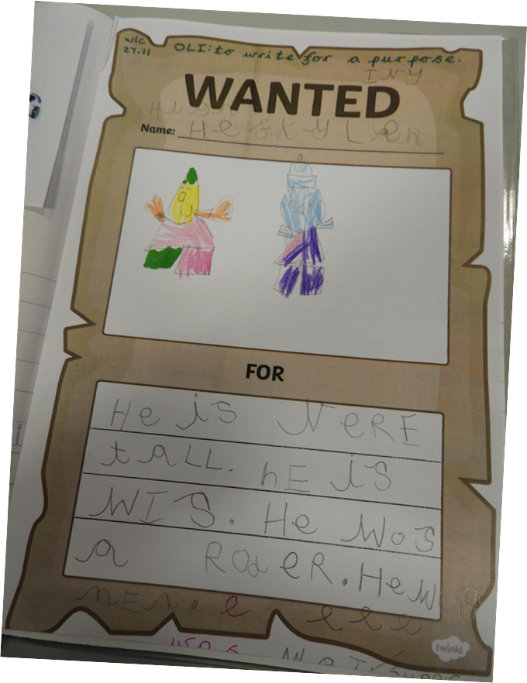 In Giraffe and Zebra Class the children reported a shocking incident – who had eaten all of the biscuits? It was time to get the magnifying glasses out and look closely for the clues! The children had their suspicions and quickly cracked on creating e-fit drawings on the computer and writing crime reports. They quickly established who did it and Mrs Bennett promises that she will replace the biscuits and never do it again!

In Gorillas and Pandas Class something very strange happened on Thursday – all of their chairs went missing in the classroom! The suspects were quickly identified and narrowed down to Mrs Clayton, Miss Moore, Mrs Hudson, Mrs Harris and Mr Williams-Jones. They all appeared to have an alibi so it was very tricky and the children had to work hard looking carefully at the clues. Eventually they pieced it all together – the salt and vinegar crisp loving and size 6 boot wearing suspect was Mrs Hudson! She promises never to trick Miss Moore and Mrs Clayton again. Well done Year 2 for solving this crime! 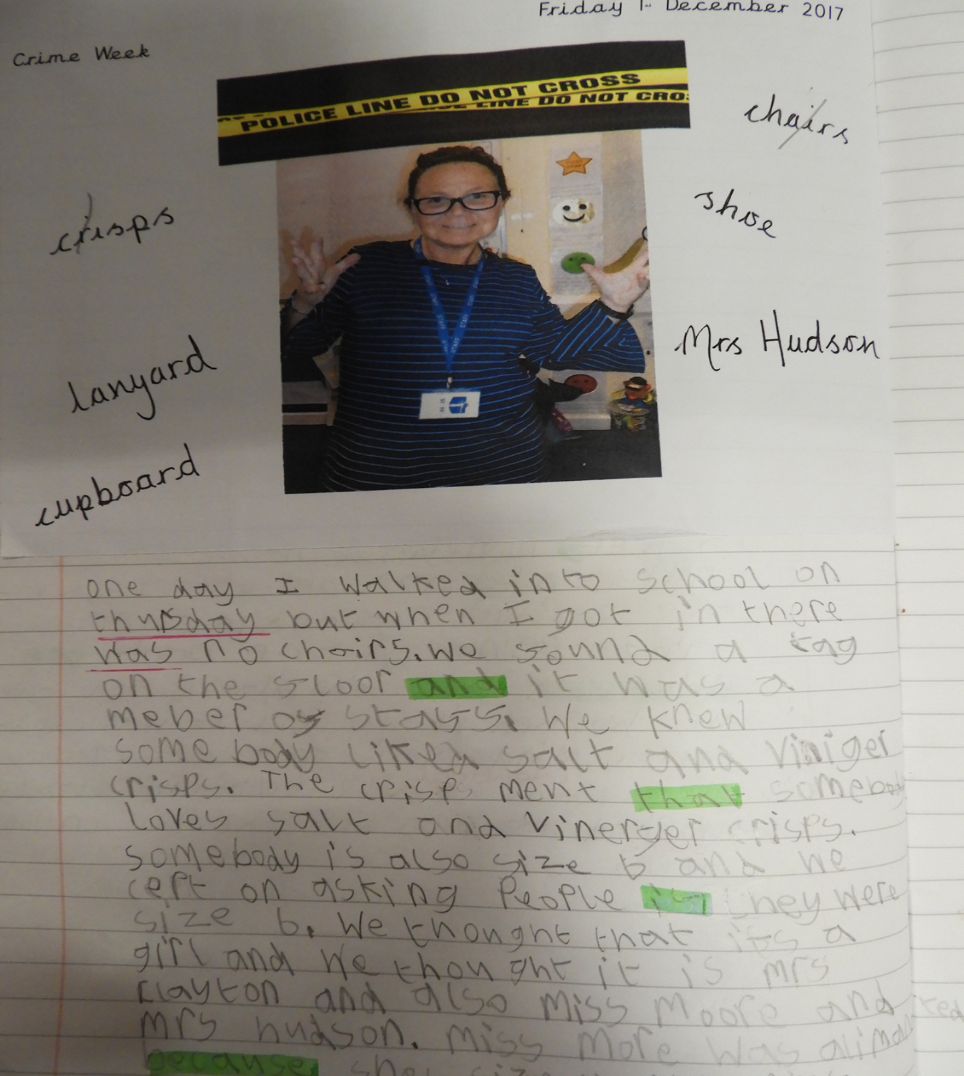 Seals, Polar Bears and Penguins each had mysteries to solve in their classrooms. An evidence trail was left and through careful exploration of clues, interviewing of suspect and a process of elimination each class were successful in identifying the suspects – who’d have thought that Mrs Wood, Mrs Furness and Mrs Hatful could be so mischievous! 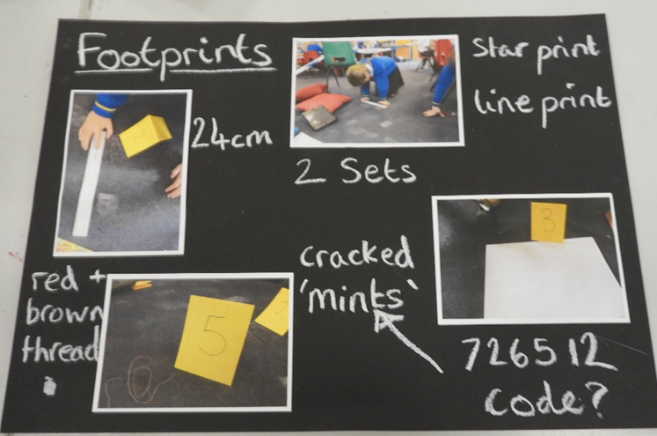 Hedgehogs, Dormice and Bats were summoned to the hall on Monday morning as Mr Slade had been in to complain to Mrs Early about a terrible mess that had been left in Bats Class, the Library, the male staff toilets and in Mrs Early’s office. The finger was pointing heavily at the children and staff in Year 4 and they had to investigate further and report back to Mrs Early on this matter with the utmost urgency. The children quickly established who the suspects were and eliminated it to a Boggart from the book “Spiderwick Chronicles”. Using evidence from the Field Guide they were able to write a persuasive letter to Mrs Early to convince her using detailed analysis of the evidence. 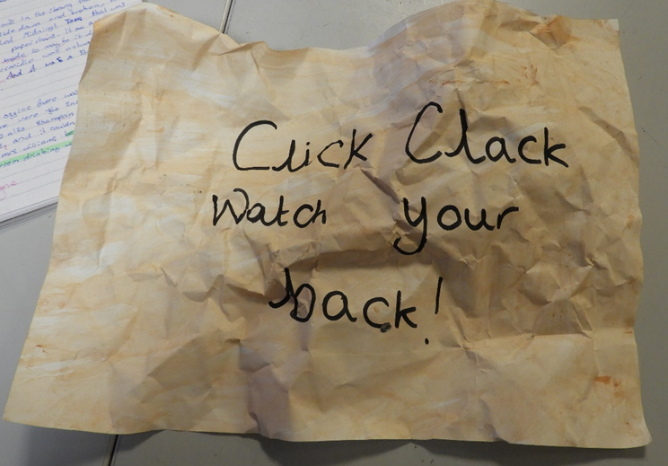 Ocelots and Macaws Class turned detective taking inspiration from Arthur Conan-Doyle’s “Sherlock Holmes” detective fiction which was first written 125 years ago. The children studied “The Red Headed League” and had to use their detective skills to predict the ending of the story. They plotted out the incidents on a Crime Board in the style of detective dramas and successfully solved the crime. They took their learning further by investigating fingerprints in Science and how they can be used to solve crimes. 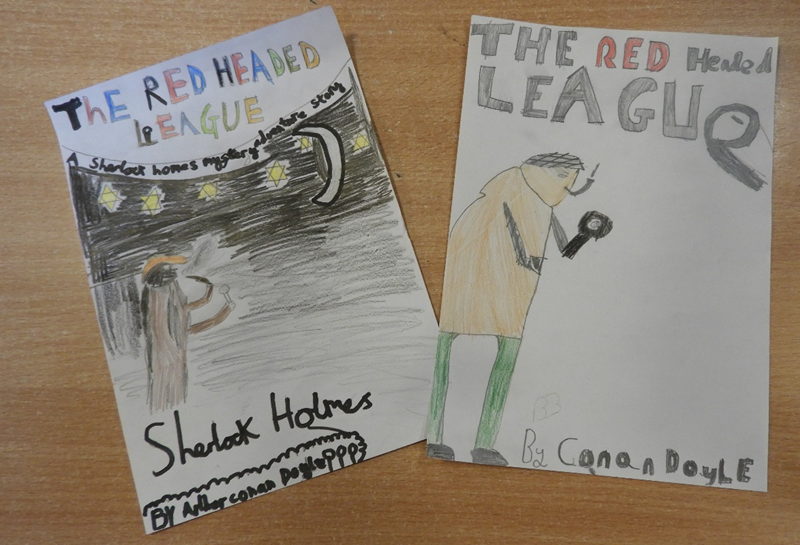 Sharks and Dolphins Class looked at the classic famous detective board game – Cluedo. The children learnt about the characters, weapons, rooms and mechanics of the game before they thought about how they could plan and create a version of their own. They are looking forward to playing their games with each other. 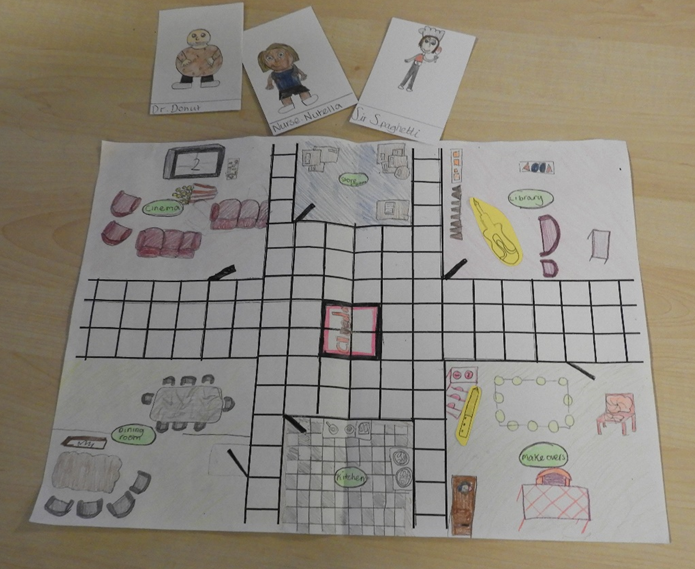 In French the children did code-breaking tasks from the Linguistics Olympiad which got the children to look at language from a logical point of view and had to break codes to do with jewel robberies. The children also had the chance to find out about famous French-speaking detectives like Maigret, Poirot and Tintin.

The children all got the chance to show off their detective skills in a special sharing assembly. What a great experience for the children to be detectives for the week! 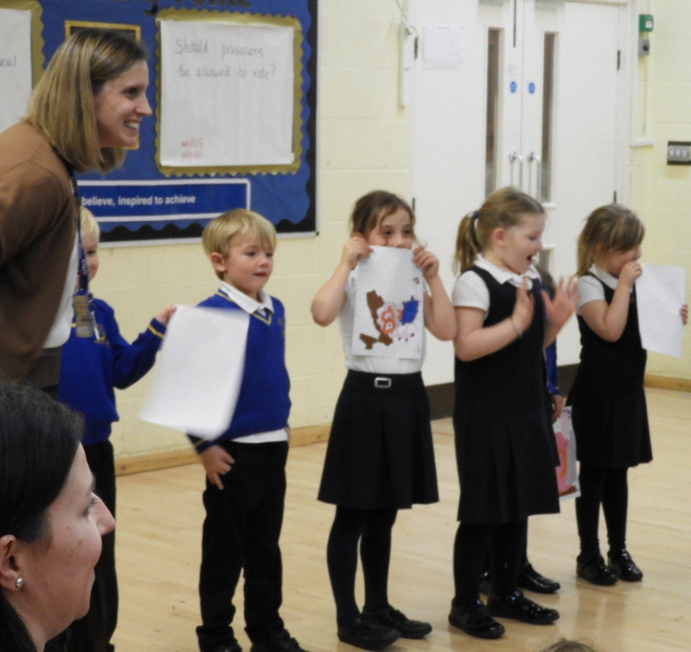